You are here: Home / Pontiac Tech Tips / Rebuilding the Pontiac V8: A Primer

Rebuilding a Pontiac V-8 engine can be a daunting task. It can be easier if you are properly prepared. This article will set you on the correct path toward bringing your beloved Pontiac back to life.

When Pontiac designed its V8 packages, each engine type was subjected to an endurance test, which consisted of static operation at 4,500 rpm on a dynamometer for 100 consecutive hours without shutdown. The engine was then completely disassembled and inspected for any signs of abnormal wear. If nothing of significance was detected, it was one step closer to reaching production. 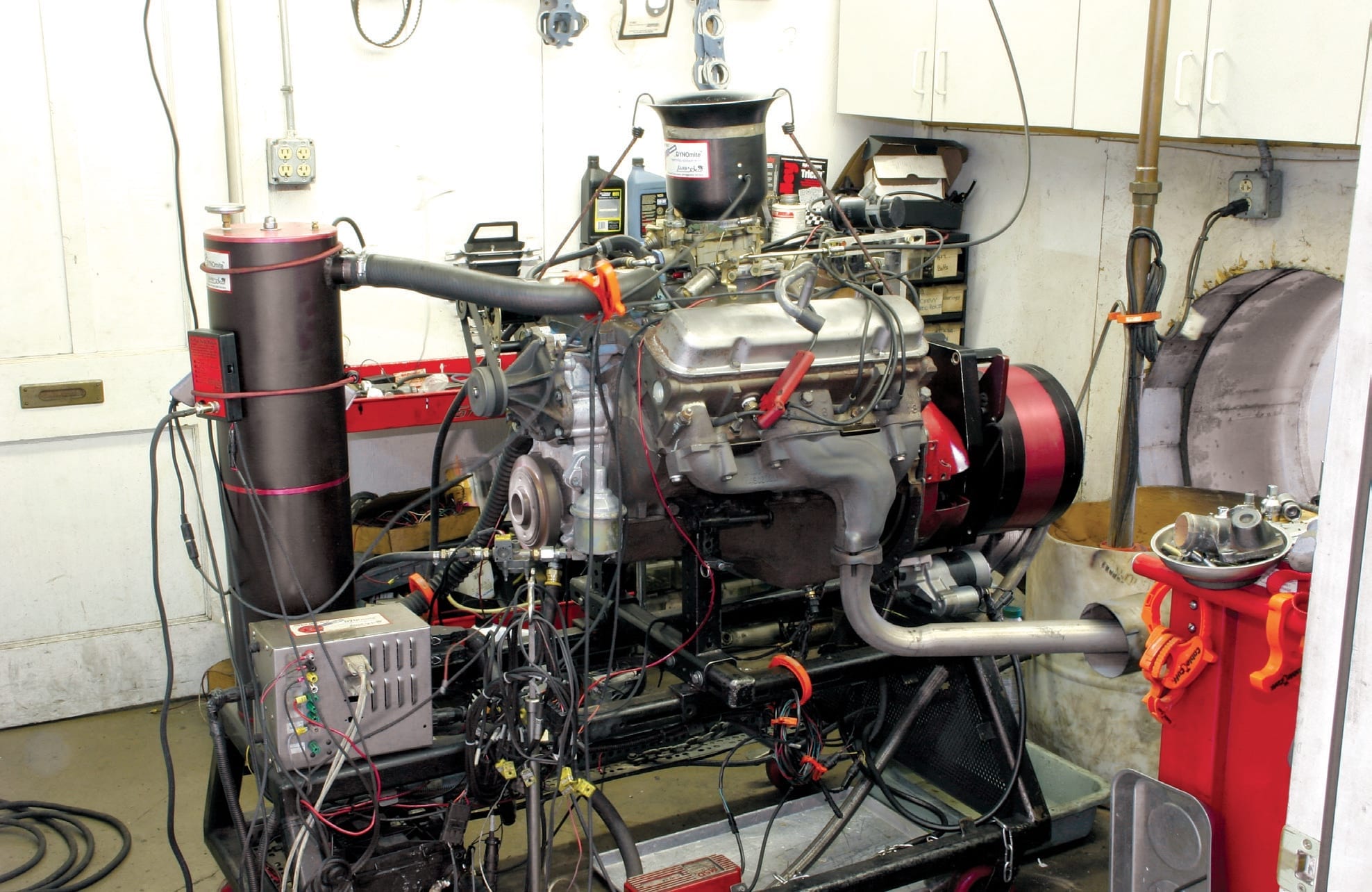 An engine dynamometer is an excellent tool for breaking in an engine and measuring output under full-throttle load. The best machine shops or engine builders use a dyno to ensure a completely assembled engine operates properly before delivering it to a customer. Measured output values can tell you if your engine meets your performance expectations.

Through durability testing, Pontiac’s goal was to develop a V-8 engine that could endure 100,000 miles of normal use before requiring a rebuild. Extra material was cast into the components so that each could easily accommodate being moderately machined at least once. 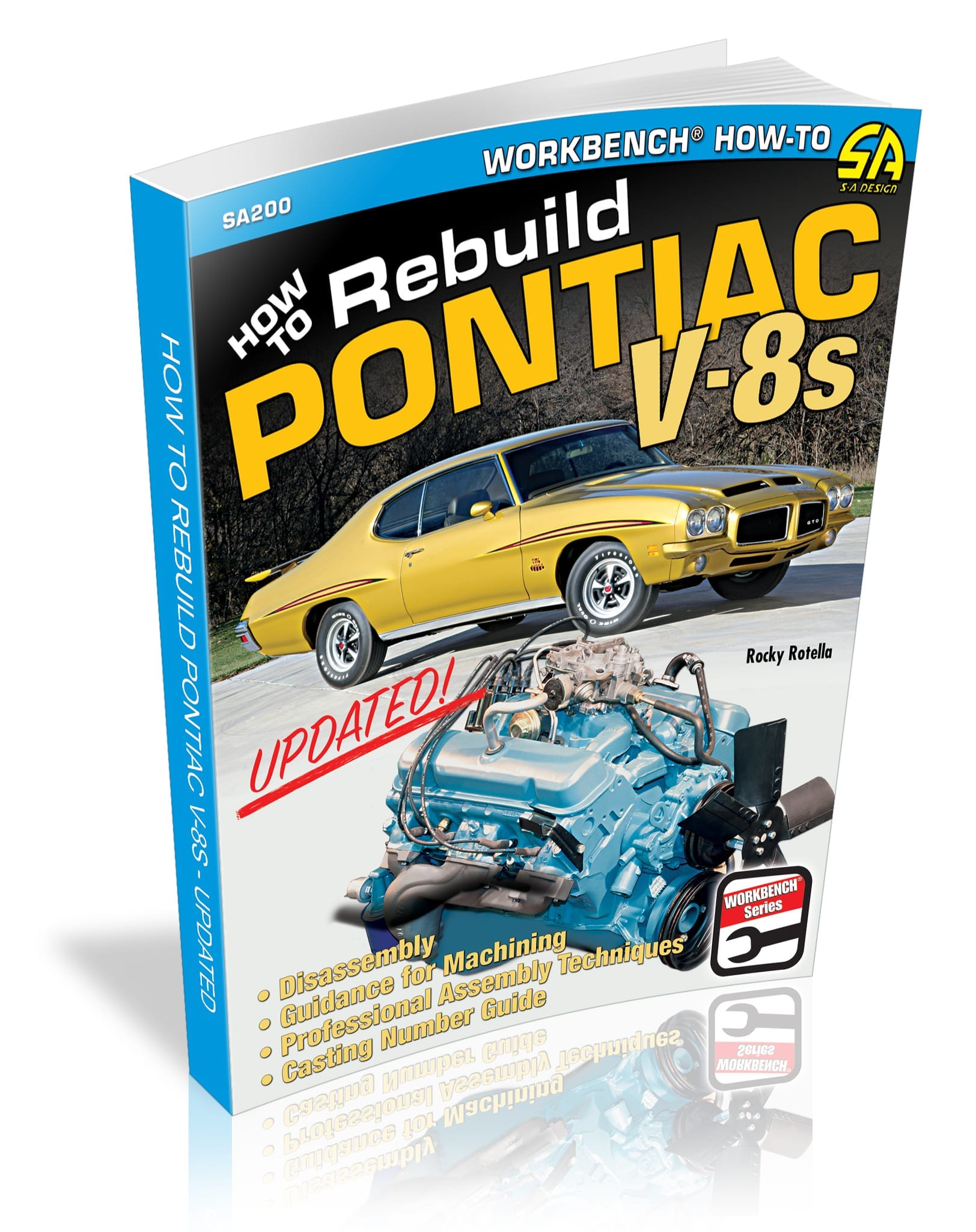 This Tech Tip is From the Full Book, HOW TO REBUILD PONTIAC V-8s – UPDATED EDITION. For a comprehensive guide on this entire subject you can visit this link:

Modern passenger car engines are designed to last 150,000 miles or more, and there are a number of factors that allow them to accomplish this. Modern machining and finishing techniques, piston ring technology, and engine oil quality are generally considered better than ever before. Modern fuel injection ensures instant start-up and improved cold-weather operation and prevents excessive fueling to wash the oil film from the cylinder walls.

In addition to those advancements, most modern cars are typically lighter and can accelerate with less resistance to motion, lessening the overall load an engine sees on a daily basis. The use of overdrive transmissions equates into reduced engine RPM during normal conditions. Even without these advantages, but with routine maintenance and general care, it’s common to find a Pontiac V-8 that exceeded the 100,000-mile mark by many thousands of miles.

Neglect often results in an engine that falls well short of its intended lifetime. There’s no telling what type of lifestyle your Pontiac led prior to your taking possession of it. If your Pontiac V-8 operates smoothly, doesn’t use oil, and doesn’t smoke, chances are that it’s in relatively good operating condition. But it may not be in perfect health and may benefit from a complete rebuild.

The newest Pontiac V-8 was produced in 1981, so it’s quite possible that your engine has already been rebuilt at some point in its life, but there’s also a chance that it’s never been apart before. There’s no way of knowing an engine’s internal condition without complete disassembly, and unless you’ve owned it for a number of years, you really have no way of verifying originality. No matter your engine’s circumstances, now might be the opportune time to give your Pontiac a complete refresh. 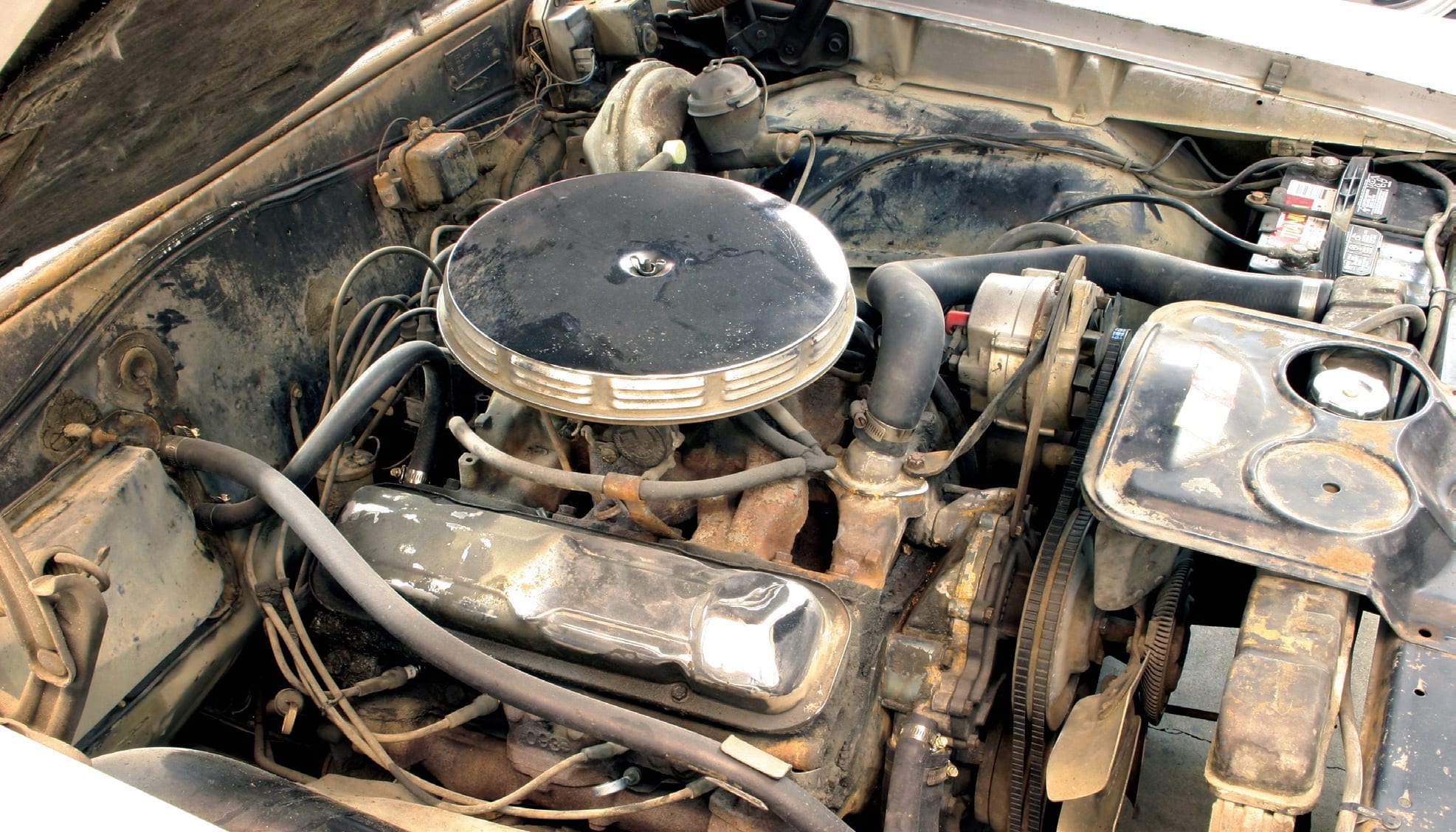 When looking for an engine to rebuild, you can tell that an engine has been rebuilt if it has been freshly painted and is relatively free of heavy grease deposits. I prefer an engine that is completely covered in grime because it generally indicates it is a complete original that hasn’t been tampered with over the years. This particular 1966 389 4-barrel could be an excellent foundation for a restoration application.

The purpose of any engine rebuild is to eliminate the internal wear that results from normal operation and restore any lost performance.

A typical rebuild should include machining each contact surface, replacing all sacrificial components, and installing new bearings, seals, and gaskets. If properly executed, the effort should produce a Pontiac that runs at least as well as the day it rolled off the assembly line, and the use of high-quality gaskets and seals should prevent any annoying oil or coolant leaks.

There are other factors beyond normal wear that might force an owner to rebuild an engine. Those might include incorrect assembly by a shop during a prior rebuild, significant damage from component failure after exceeding the engine’s intended operating range, or simply bad luck. The machining performed during the rebuilds, or the extent of damage that occurred when a component let go, determines how usable your existing components are.

One of the first steps to any successful rebuild is creating a sound plan of action. You need to determine which category your rebuild best falls within. Is your engine a strictly stock rebuild, a mildly modified street engine, a significantly modified street/strip setup, or something in between the previous descriptions? After you’ve identified the type of engine you want and the application for the engine, you need to establish a fairly certain horsepower and torque target. This helps you and a machinist select the parts to meet your goal and then establish the budget for the build project.

Each type of rebuild requires a different rebuild plan and different machine shop services. Is your vintage Pontiac driven often and you simply feel it’s time to rebuild its engine back to near-stock specs? Are you performing a frame-off restoration and looking to rebuild and restore your Pontiac’s numbers-matching engine? Or are you less concerned with originality and simply looking to increase your Pontiac’s performance while maintaining a relatively stock appearance?

You need to identify the vintage of your Pontiac V-8 and determine if the existing components are capable of meeting your performance expectations in stock or mildly modified form. If your machinist is unfamiliar with the various Pontiac castings and the capacity of each, then it may be best to use one of the many proven combinations found in one of the many Pontiac builders out there. The answers you receive should include recommendations for total engine displacement, which pistons, connecting rods, rings and bearings should be used, and the camshaft specifications and cylinder heads that help you reach your performance goal during your rebuild.

There are two other important questions that you must ask yourself when planning your engine rebuild. How much money do I have to spend on the entire project? And how much of the actual engine assembly work am I willing to perform myself? Only you can answer all these questions, and it is common to be undecided at this point of the rebuild. You do, however, have to take a realistic approach and need to stick close to your plan once you commit to it.

When considering all that’s involved in a complete engine rebuild, some hobbyists are more content taking a complete engine to an engine builder and returning when it’s ready for reinstallation; others enjoy performing some or all of the assembly process themselves. Be realistic when assessing your experience and skill level when tackling your engine rebuild because small errors can result in significant consequences and ultimately lead to engine failure. But attention to detail and proper guidance can keep you from making costly mistakes.

I know of very few hobbyists who wouldn’t want their Pontiacs to run better. However, most hobbyists don’t gauge “better” by using a drag strip or engine dyno. To most, “better” means the amount of tire spin that occurs upon a brisk takeoff. Depending upon the application and what you’re beginning with, simply performing a basic rebuild to a tired engine may be enough to accomplish that, but some applications might not contain the ideal components to achieve that.

Pontiac designed the components of a given combination to complement one another and perform suitably for its intended application. A particular low-performance engine may have used a 2-barrel carburetor, small-valve heads, and a mild camshaft, but for the most part, its remaining components were the same as those on a similar 4-barrel offering. By simply swapping parts around, generally speaking, it’s quite possible and cost-effective to increase the power output of a 2-barrel to match that of a similar 4-barrel offering.

Significantly increasing an engine’s power output almost always requires using high-performance factory pieces, such as those from Ram Air engines, or significantly modifying 4-barrel pieces to extract maximum potential from them. Either of these approaches can be quite costly. Though still expensive, it’s often easier and more cost effective to purchase some aftermarket components designed as replacements for the desirable stock pieces.

If you’ve been wrenching on cars for any amount of time, you likely understand that using the most expensive tools doesn’t make a mechanic great. The absolute best tool for any job is the one that helps complete a given task at a given time, and it doesn’t matter if it was purchased off a name-brand tool truck or from a reputable retailer. Snap-on, Mac Tools, and other brands make professional hand tools for working mechanics. These fine instruments are a pleasure to use and should last a lifetime or longer. However, the at-home mechanic can competently rebuild an engine with Craftsman, Husky, and other high-quality consumer tools. But I don’t advocate using low-quality tools that can damage fasteners, round-off bolt heads, and generally make a mess of a basic job.

Before any engine can be rebuilt, it must be completely disassembled, and tearing it down before delivering it to a machine shop can often save you a few bucks. Fortunately for Pontiac hobbyists, V-8 disassembly doesn’t require much beyond basic hand tools for the majority of it. If you don’t presently own such equipment and future plans include additional engine rebuilds or repairs, then you might consider investing in them as they can be handy for most automotive repairs. A list of the tools you’ll need at this time includes:

Some specialized equipment, such as a valve spring compressor, engine hoist, and engine stand, are required. But keep in mind: The tools mentioned above are for disassembling and assembling your Pontiac V-8, as well as several other task-specific tools. You might look into renting or borrowing them from friends or parts stores for a single-engine rebuild. If additional engine rebuilds are possible down the road, then now might be the best time to add them to your toolbox. However, they are usually more costly and can quickly deplete a budget. The list of those specialty tools includes:

One of the most important resources to have on hand during your entire rebuild is a Pontiac service manual that’s specific to the year of your engine. Even though the Pontiac engine family is so closely related, most individual engine models contain at least a few characteristics that are unique to certain model years, and a Pontiac Service Manual should address an area if it varies from engine to engine. 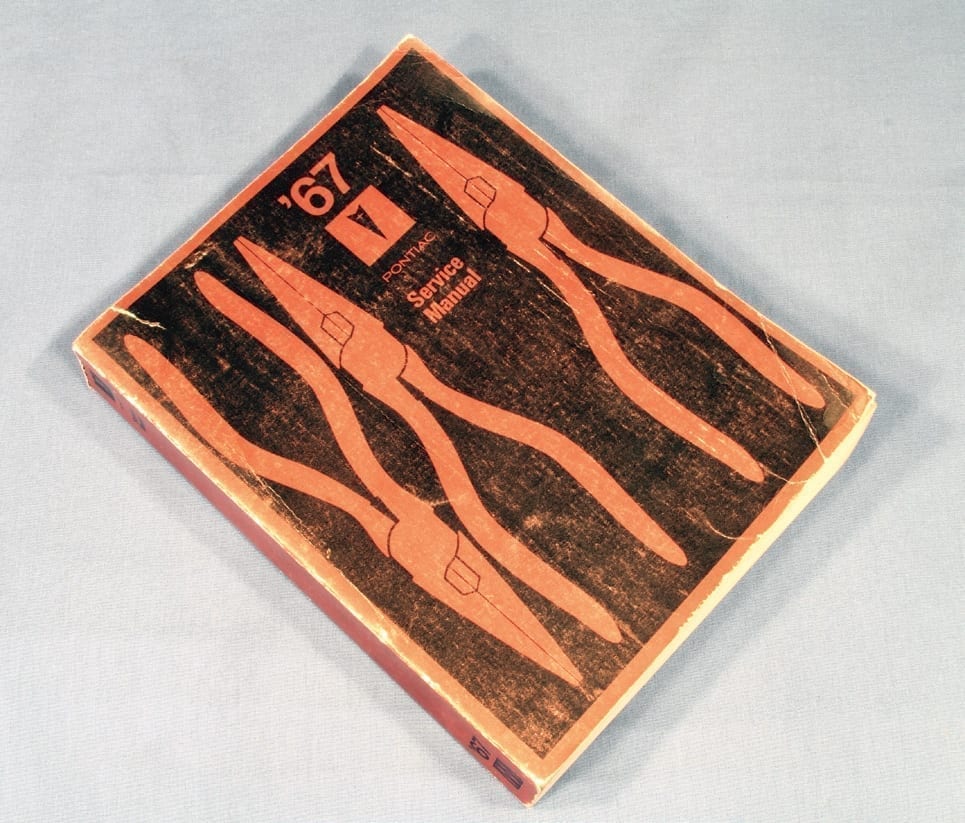 A Pontiac service manual is an excellent resource that can provide information about specific details for a particular model year. Costly reprints are commonly available from various sources, but worn, lower-priced originals are often available on popular internet classifieds or auction sites. A service manual for the model year of the engine being rebuilt is a must-have item for every enthusiast.

Written by Rocky Rotella and republished with permission of CarTech Inc

LEARN MORE ABOUT THIS BOOK!

If you liked this article you will love the full book!